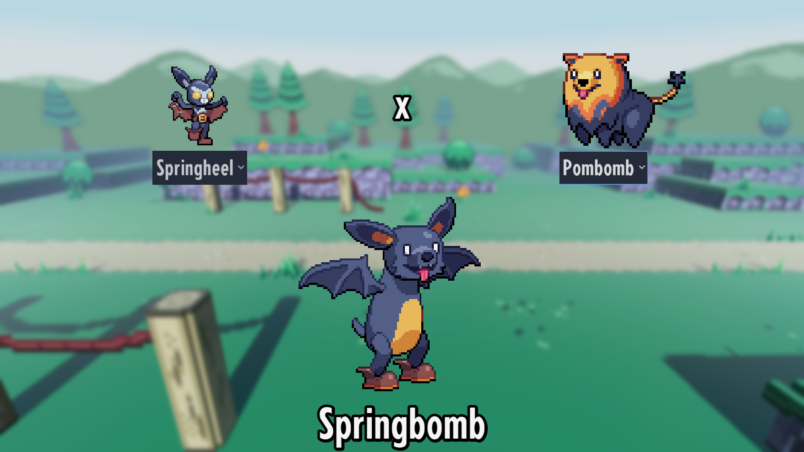 Fusion is our headline feature for Cassette Beasts. It’s something that is so rarely available in the monster-collecting genre, but frequently requested by the fanbase! There are so many pieces of awesome Pokémon fusion fan art out there…

To get a feel for how Cassette Beasts’ fusions look, and what sort of variety you get out of just 6 basic monsters, check out our interactive online demo. In the final game we estimate there will be 120 basic monsters, which gives us a total of 120², or 14,400, unique fusions. If you include all of the bootlegs as well–rare monsters with alternative palettes, types and learnsets–the total comes to… a lot more: 2.8 million. (Caveat: specific numbers are quite likely to change before release!)

Big numbers are all well and good, but what does fusion actually mean to the gameplay?

Fusion works like a temporary evolution during battle. After transforming your player character and companion into monsters, you can fuse them into a single battler! For the remainder of the battle (or until you un-fuse) the two characters work as one, with dual typing, combined stats, and access to both sets of moves.

Fusion works in tandem with several other systems in the game:

When you battle in Cassette Beasts, you’re not fighting alone. There are several companion characters you can meet and travel with. By completing personal tasks for your companion you can improve your relationship with them. The strength of your relationship determines whether you can fuse, and how strong your fusion is!

In fact, Fusion Power, the most powerful attack in the game, can only be used by maxing out your relationship and then fusing. Fusion Power’s exact effects vary depending on which two monsters you’ve combined.

In a lot of turn-based RPGs, attacks cost a certain amount of a resource to use. This resource is often called something like stamina, MP or PP. Designers use these costs to encourage you to do some tactical decision making. Spamming your highest-power attack every time is boring, after all! Unfortunately, the designers are not always successful at achieving this.

In Pokémon, PP doesn’t matter at all unless you’re in a long dungeon or facing the Elite Four. Even then, recent games are so generous with Ethers and Elixirs that you don’t ever have to worry about running out of PP. During the story, it’s pointless to use anything other than your highest-power damaging moves.

Games with MP systems often run into this too. Eventually you level up enough that your MP limit or your MP regeneration rate is so high that you never need to use anything other than your highest power spell. Instead of giving you more options and more challenging tactical decisions, the game effectively takes options away as you progress because using anything other than your highest-power attack is pointless.

To work around this, some developers add cooldowns on top of MP or PP systems, but IMHO this is inelegant. It can be needlessly tiresome to plan several turns ahead when you have to consider cooldowns as well as points.

For Cassette Beasts, we’re taking inspiration from board games–we’ve chosen a variation on Action Points.

Battle starts with every character on 0 AP. At the start of each round everyone gains 2 AP (up to their maximum). Then, they can all choose one move to use that turn. Each move costs a certain amount of AP: lower-power attacks are cheap (or free), while high-power ones can cost as much as 10 AP.

Every turn you’re faced with the decision of whether to save or spend your AP. Balanced around AP like this, every move in the game has its place in the battle system. There are no useless moves, because the weaker, cheaper moves let you save up AP for your big attacks.

A legitimate criticism of AP systems is that they can make battles slow. This would be a major problem for a game that bombards the player with repetitive random encounters, but that’s not our intent anyhow.

So anyway, when you’re fused you gain the same total amount of AP (i.e. 4 AP) each turn. However since it’s all on one character now, you build up points towards your most powerful attacks quicker.

Fusing lets you unleash more powerful attacks sooner. It’s such a little thing, but it makes a huge change to the feeling of fusion battles!

The player character is not the only one who can use fusion–certain NPCs can as well! And one plan we have for late- and post-game content involves creating boss fights out of fused monsters.

(We have pretty wild ideas for non-procedural bosses too. If you’ve played our other game Lenna’s Inception and liked the bosses there, you won’t be disappointed!)

Anyway, that’s all I want to share for now. Let us know what you think in the comments and don’t forget to share this post if you enjoyed it! ❤︎