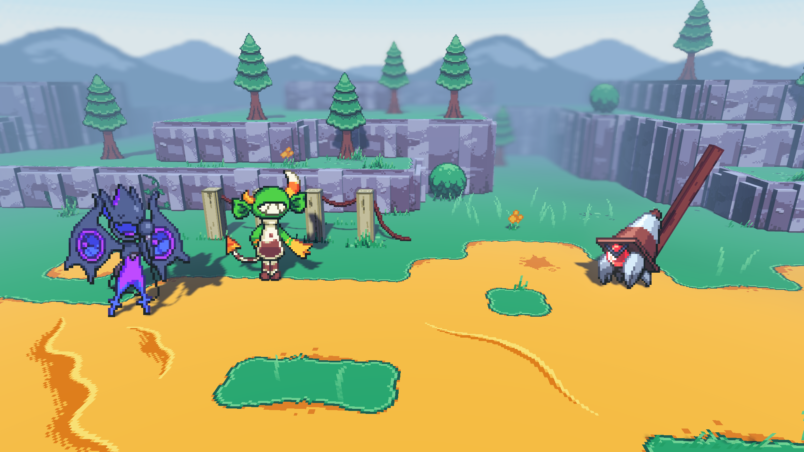 Happy new year, folks! This week we’re looking at some of the features you can make use of in Cassette Beasts to spice up your playthroughs.

Once you’ve beaten the game, Cassette Beasts has a number of options you can use to customise your next playthrough.

While we recommend playing the game through normally on your first playthrough, these options can also be unlocked with a cheat code–handy if you’re playing the game on a different machine at a speedrun competition! The cheat code will be shared after the game’s release.

Let’s go through these one by one:

First up, we have “Tapes Break Permanently,” which means that any tape with 0 hit points can’t be repaired and will be unusable for the rest of your playthrough! But don’t worry, as long as you have at least one usable tape in storage, you’ll be able to keep going after defeat.

If you want to up the stakes even more, turn on “Defeat is Game Over,” where a single loss in battle means game over – no matter how many tapes you have left. In Cassette Beasts, your party members take overspill damage when a tape breaks, so one big hit from an enemy could be enough to completely end your run!

Feeling adventurous? “Randomise Monsters” lets you mix up the habitats of monsters, as well as the starter and partner tapes. This is a great way to try out monsters you wouldn’t normally use in your party.

With “Randomise Types,” my personal favourite, you can randomise monster species’ types, as well as their colour palettes and movepools to match. This isn’t the same as making everything a bootleg–each species will always be a particular type, just not the one you’re used to!

If you want to mix up your opponents’ strategies, “Randomise Moves” is for you. This option can be used to randomise the default set of moves for monsters, as well as the moves you unlock by upgrading tapes. These moves are still compatible with the monster species, but the combinations can be surprising–a normally weak monster could become something to dread!

Finally, there’s the “Random Seed” option, which can be used to control all the aforementioned randomisation options. It can also control the randomisation of certain variables in the game, even when no customisations are enabled – perfect for speedruns. With this option, sticker merchants will always have the same stock on the same day, and chests will always contain the same items.

These options are our answer to the Nuzlocke and permadeath features the community has been asking for. While there aren’t currently any options that enforce the first Nuzlocke rule (only one monster can be recorded per ‘route’), we’ll be keeping an eye on how players choose to interpret that rule in Cassette Beasts’ open world.

A small but dedicated speedrunning community grew around our last game, Lenna’s Inception, after its launch. We learned a lot from this community about what makes a game suitable for speedrunning and what does not, and factored this into Cassette Beasts.

On all platforms, you can enable an in-game timer in the settings menu at any time. This timer displays in the top left of the screen, and records how long you’ve been playing your save file for. It automatically pauses on loading screens and during character customisation.

While the in-game timer is enabled, you can hold the middle mouse button (or Y on a controller) to speed up dialogue, and automatically select dialogue options.

If you have LiveSplit installed (available for Windows only), you can connect Cassette Beasts to the LiveSplit Server component, and automatically send split commands based on certain in-game events. The game tracks numerous stats in your save file, for the purpose of achievements. These stats include which bosses you’ve defeated, how many species you’ve recorded, and so on. Any of these stats can be used to trigger splits.

The LiveSplit integration is fully configurable through an INI file, so you can create your own list of custom splits!

The configuration file makes it very flexible. You’re not locked to beating certain bosses in a certain order, or even starting and ending your run at the usual places. If you want the timer to start when you beat the first boss, split after you’ve recorded 3 Traffikrabs, and then finish when you defeat a certain NPC, you can!

We hope that this will make speedrunning Cassette Beasts fun and easy for people to get into.

More information about how to configure the LiveSplit integration will be published on the wiki after the game releases.

That’s all for this week, folks! If you want to know more, why not swing by the official Discord! As well as that, you can always follow us on Twitter for future updates!