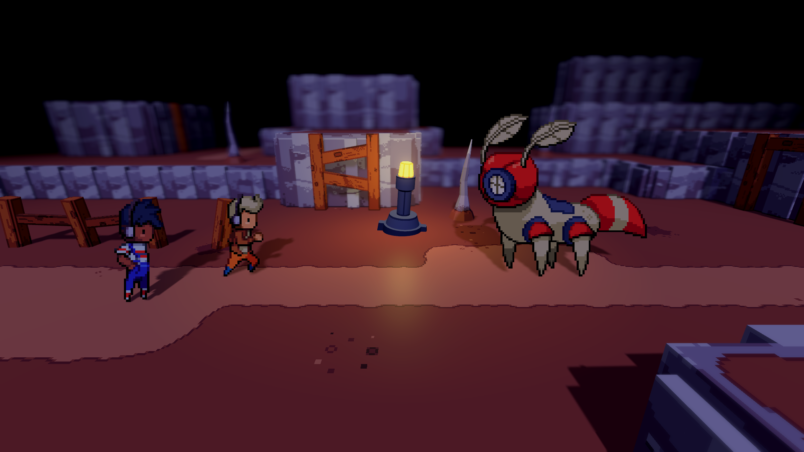 Hey folks, here’s a little look at what I’ve been working on since last week: caves! Before I go into much detail though, keep in mind that Cassette Beasts is still under development and anything mentioned here could change before its release.

Side quests in Cassette Beasts can often take you to caves in any part of the island of New Wirral. Caves can be entered at any time though, so if you’re looking for valuable resources, rare monsters, or just new routes and shortcuts across the island, you may want to explore them anyway.

The contents of caves vary a lot. Some simply contain one of the caches the rangers leave around to encourage exploration. Others contains puzzles to solve, or test your skill with your movement abilities!

But one thing all caves have in common is that they’re inhabited by some quite fearsome monsters. Rogue Fusions–minibosses that are half one monster and half another–can be found here. These ferocious beasts attack on sight, and when they get to the surface can cause drastic weather and ecological disturbances. Part of the reason the rangers were set up in New Wirral was to keep these creatures under control!

Defeating a rogue fusion splits it into its two component monsters, who will then be able to have a chance at regular monster life.

Rogue fusions are a good source of bootleg monsters to record for your tape collection. Bootlegs have altered colour schemes, types, and movesets. Having one in your party can open up a ton of new battle strategies!

There are several much more substantial dungeons (and bosses!) to find around New Wirral, but we’ll write about those another time.

That’s all we have for now! As always, to keep up with the latest info, follow our studio twitter account and/or join our growing Discord community!

If we don’t find time to post again before the new year, then I hope you all have safe holidays and a happy new year!