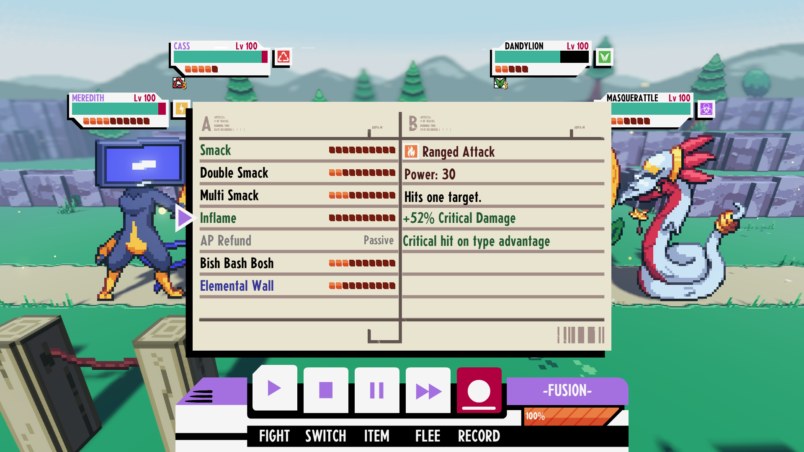 Hey folks! Today I’m going to run you through how you’ll be able to configure your monster tapes with new moves and abilities! Scroll down if you’re just here to check out the new beast, Palangolin.

In Cassette Beasts you’ll fight by using your cassette tapes to transform into the monsters you’ve recorded. At first, your tapes won’t have many moves to use in battle, but as you spend more time using them they’ll unlock new ones. If you don’t like the moves a tape gets by default you can always replace them using stickers! A move you don’t want can be peeled off as a sticker, freeing up an empty slot for you to put a different move sticker down!

You’ll get move stickers in a few ways (including by peeling them off of other tapes), but what’s important is that you can always easily peel and apply them to customise your combat abilities. In some ways, finding a good set of stickers is just as important as finding a good set of tapes. Not all stickers are compatible with all tapes of course, so if a particular strategy you have in mind requires certain moves, you may need to take that into consideration when choosing your tapes.

Some stickers provide a passive ability instead of a regular attack. And some stickers affect which branch your tape will take when evolved. So they’re pretty useful things with wide variety of effects!

Occasionally, you’ll come across a sticker marked as ‘Uncommon’ or ‘Rare.’ These stickers come with added randomised attributes that provide bonuses over the regular ‘Common’ version of the sticker, such as increased damage, or a chance to provide a buff, or inflict a debuff.

Smack is a basic attacking move that costs no AP. You’ll use this when you’re saving up AP for your big attacks. In addition, it’s typeless, so here it’s getting the Plastic type from my Traffikrab.

This version of Smack has two uncommon attributes: one that will sometimes let your attack go before others, and one that gives you a higher critical hit rate the more sticker slots you leave empty. Fully upgraded and evolved tapes have up to 8 sticker slots, so this is quite good!

Inflame is a ranged Fire-type attack. This one has two uncommon attributes that work really well together: one increases the damage dealt by critical hits, while the other guarantees a critical hit when you’re at a type advantage (in addition to the usual debuffs type advantaged-attacks inflict).

AP Refund is a passive ability, a kind of move that you don’t use manually, but is triggered automatically by certain conditions. This AP Refund sticker has one uncommon (green) and one rare (blue) attribute. The uncommon attribute increases the chance of AP Refund taking effect after I use another move. The rare one passively increases my Melee Attack stat by 3%. As long as I have the tape and the sticker equipped my Melee Attack stat is higher!

Elemental Wall is a status effect move that a lot of monsters can get access to. It creates a wall in front of the user can block incoming hits for a while. There are various ways of countering walls with type chemistry, multi-hit attacks and so on, but what’s interesting here is its rare attribute: it has a chance to automatically be used (for free) at the start of battle!

And that’s just a taste of the moves and attributes available! So far the game has more than 170 moves with plans for more, and over 60 different kinds of attributes.

You might have noticed a new monster in the video above. It’s Palangolin, chivalric knight of principles and honour. Palangolins wield striking golden halberds, which they use to defend their allies in the heat of battle.

Finally, in case you missed them, here are a couple of little videos we’ve tweeted over the last few weeks–including a quick look at the bestiary, and a timelapse of the day-night cycle! And hey, while you’re here, don’t forget to wishlist Cassette Beasts on Steam!