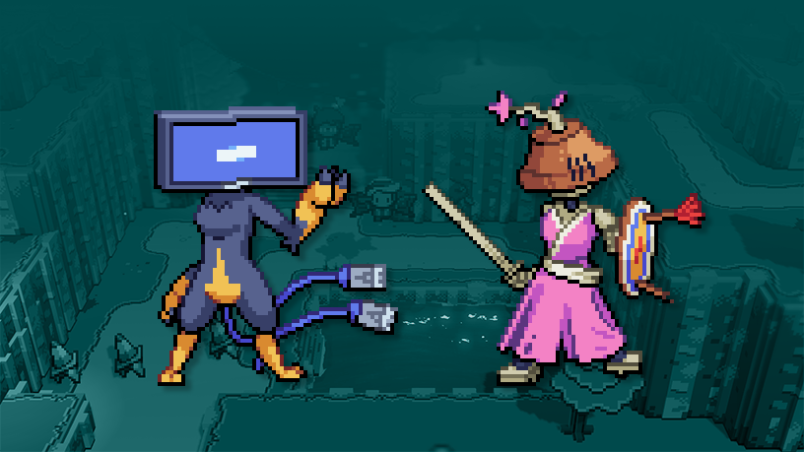 Hey folks! Today we wanted to shine a spotlight on some of the monsters that featured in our trailer, but haven’t been formally introduced!

Cat-5 is a powerful lightning-type beast, with razor sharp claws and a towering stature. Whilst its face may resemble a plasma screen display, it appears to be perfectly able to see out of it. How does it eat without a mouth, you may ask? It draws static electricity out of the atmosphere with its twin cable tails in order to power itself.

Cat-5, of course, featured prominently in our reveal trailer. We felt that its strange appearance that merges animal aspects with technology would showcase the monster design aesthetic of Cassette Beasts quite well!

Kirikuri is a plant-type monster. Before it evolved, it was a wooden training dummy – but now it has armed itself with a wooden practice sword and archery target shield. Its featureless face hidden behind a wicker hat, Kirikuri is a master of melee combat.

We also recently previewed Cassette Beast‘s weather system on our Twitter account, so you should definitely follow us there for future news and tidbits! And, as always, you can join our official Discord community to talk with us and the rest of the Bytten Studio community!

To commemorate a month or so passing since we announced the game, I also put together a little breakdown of how I animated the animated segment of our trailer (featuring Cat-5!). Check it out!