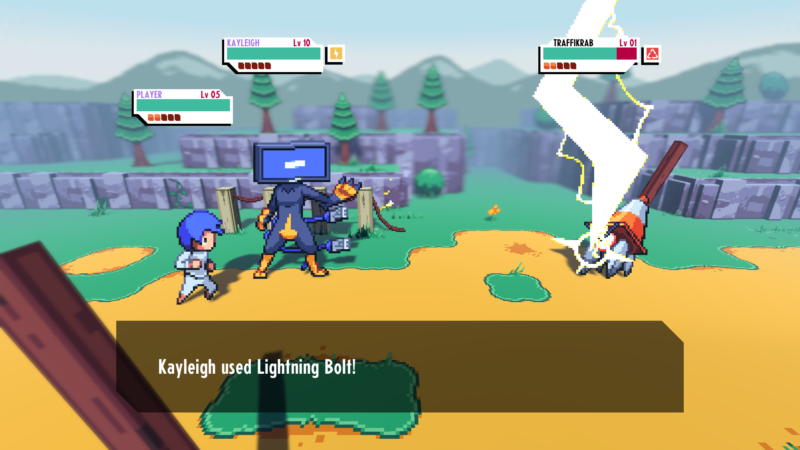 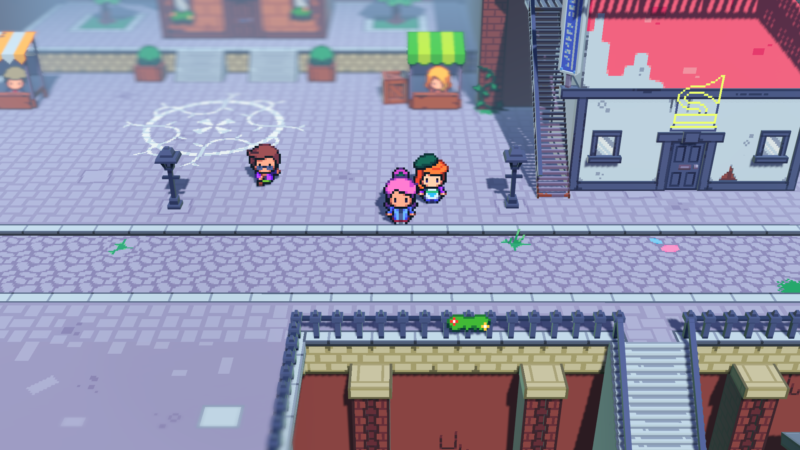 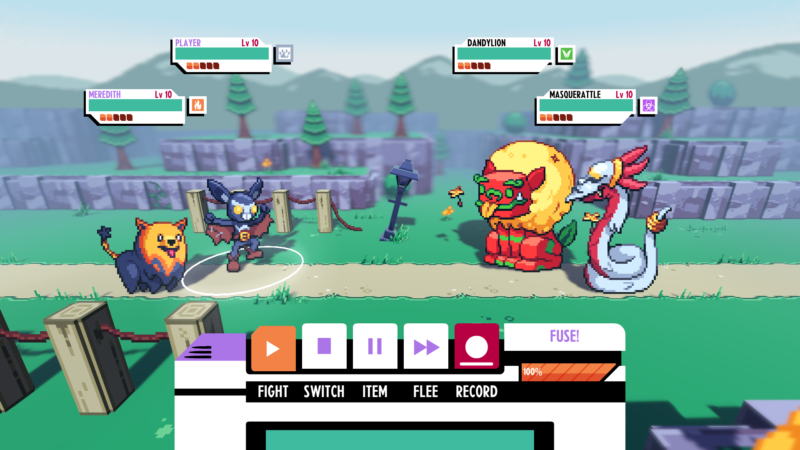 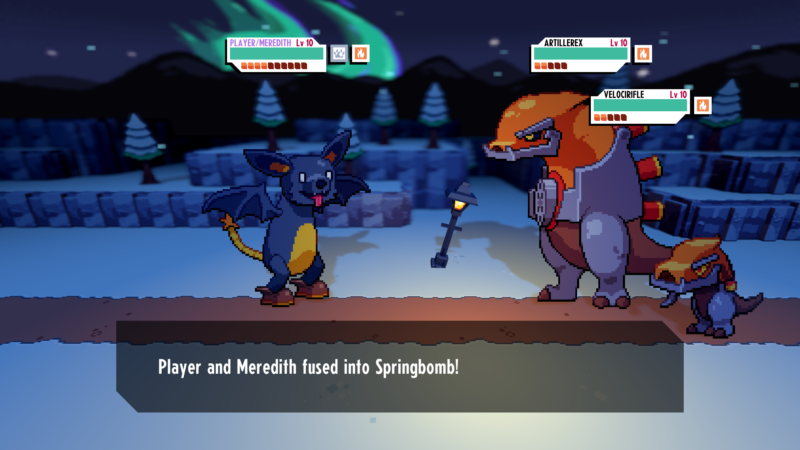 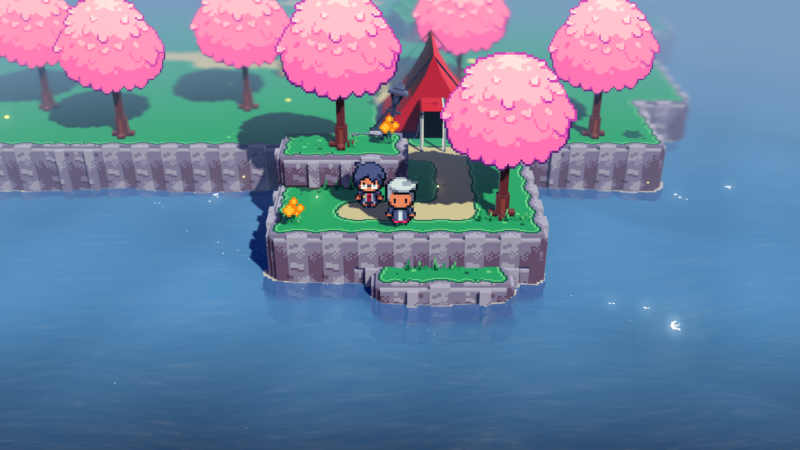 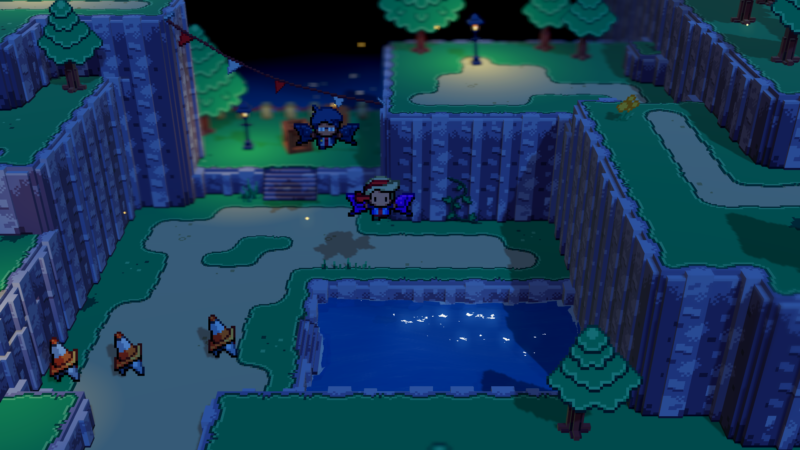 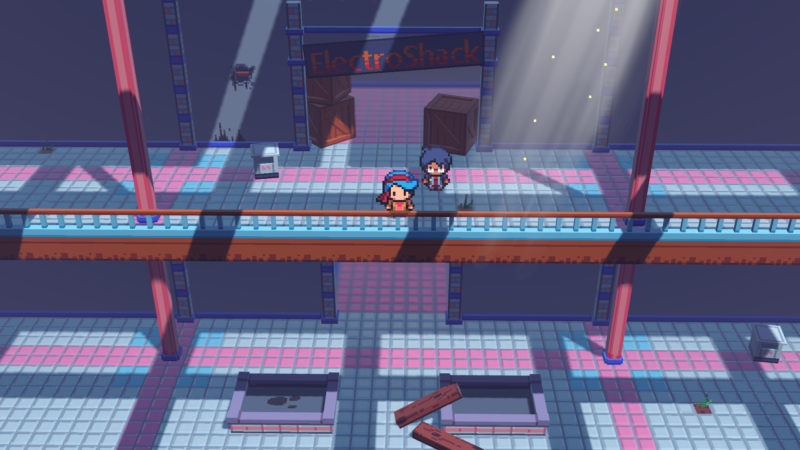 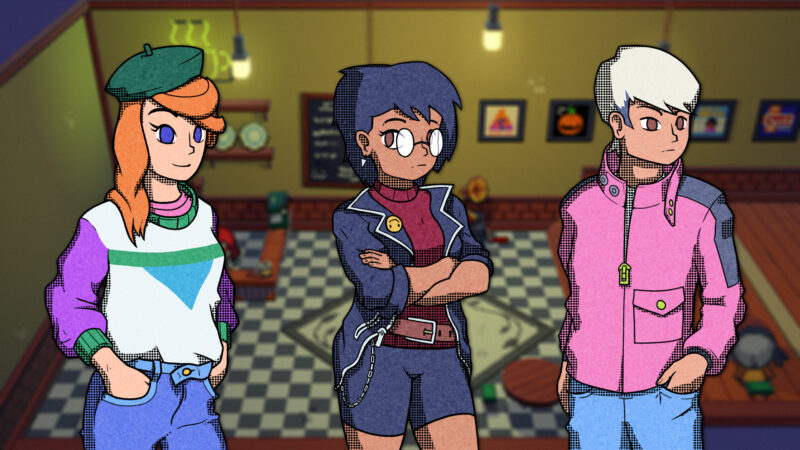 We’ve covered the Fusion System already, which allows you to combine any two monster forms into a more powerful form during battle. Now I want to give you some detail on the chemistry system in Cassette Beasts.

So what is chemistry? In Cassette Beasts, chemistry replaces the systems of type effectiveness you typically see in RPGs. Instead of providing numerical damage multipliers, type match-ups generate different status effects. These status effects can be beneficial to you if you get it right, or to your opponent if you get it wrong!

Plastic and Glass types are as you’d expect; they’re made possible by the chemistry system. ‘Astral’ is our paranormal / space / cosmic type. And as for Glitter, read on…

So how do you read this chart? Basically, after an attack lands on a monster, the type of the attack and the defending monster are compared. One of four things can happen, depending on the color of the cell:

To gain the advantage in battle, you’ll want to land as many debuffs onto your opponent as possible, while avoiding having debuffs placed onto you. You can change your type (through chemistry, switching form, or using certain moves) to trick your opponent into giving you a buff. Or in a pinch, you can deliberately hit your ally with a weak attack to give them a quick buff!

If you’re used to Pokémon, and expect to understand the entirety of the system from the beginning of the game, it might seem daunting to have to learn every individual status effect that can be produced! That’s because in Pokémon, in order to battle competently, you do have to master the type effectiveness system–i.e. learn it entirely. In Cassette Beasts, competence and mastery are two separate steps.

In Cassette Beasts you can competently use the chemistry system by just knowing where the green, red and yellow cells are on the type chart. However there is always a tactical advantage to be gained by mastering it–learning each individual effect. This might only come to you much later in your experience with the game!

And of course the game helps you find your way around this by previewing the effects of your attack.

I can’t be the only person to find a game boring after I’ve learned how its systems works. Anything that delays mastery until later can only help the game keep some level of mystery. 😉

OK, I lied earlier when I said each monster and each move has only one type. Fusions have two types (although this might change), and certain common moves are typeless.

This adds a little more versatility to the chemistry system. You can change your own type to better land debuffs on your opponent, or defensively change your opponent’s type to turn their attacks into ones that deliver you buffs.

If you’re wondering what that row of yellow in the type chart is, here’s a hint: think about what happens to things you touch for weeks after you get hit with a glitter bomb. Yes, that’s right, they get covered in glitter too!

That’s how it works in Cassette Beasts: anything you hit with a Glitter-type attack becomes Glitter-type itself. The column of yellow, where Glitter is defending does the opposite: Glitter-type monsters change type to whatever the type of the attack they received was.

There are no natural Glitter-type monsters, and there is only one Glitter-type attack: Glitter Bomb. This is a move you might use when the chemistry system puts you at a severe disadvantage against your opponent, or if you just like making a sticky, sparkly mess and irritating everybody.

Glass actually is another fun type, but we’ll go over that another time.

I mentioned delaying mastery as one advantage of this chemistry system, but there actually several reasons we’ve decided to try this out:

And finally, a lot of the decisions we’re making for the battle system come down to whether it helps us balance the battle system in the context of an open world game. Frequently, we’re finding that part of the answer is shifting slightly away from purely vertical (i.e. numerical) progression, and towards systems mastery and horizontal systems of progression.

Anyway, I hope that all makes sense, and sounds interesting to you. Let us know what you think in the comments. And don’t forget to share this post if you like it! 🙏